Gain access to additional features such as Watchlist and Portfolio tracking.

We've sent you an activation email

Enter your email below, you will receive an email with instructions on how to reset your password in a few minutes. You can also set a new password if you’ve never set one before.

An email has been sent to with instructions to reset your password.

To ensure that account is well protected, please use 8 or more characters with a mix of letters, numbers & symbols.

A Problem ocurred while trying to confirm email

Would you invest on Portugal National Team Fan Token today?

The Bitcoin LN was first implemented into the Bitcoin mainnet in 2018 and has ever since been able to maintain an upward trajectory in terms of expanding its capacity. Read More

The Bitcoin LN was first implemented into the Bitcoin mainnet in 2018 and has ever since been able to maintain an upward trajectory in terms of expanding its capacity.

The Bitcoin Lightning Network capacity attained an all-time high of 3915.776 BTC, as evidenced by data from Bitcoin Visuals, displaying a commitment to the cause of improving BTC transaction speeds and reducing fees over the layer-2 protocol.

The Bitcoin LN was first implemented into the Bitcoin mainnet in 2018 to address Bitcoin’s infamous scalability issues and has ever since been able to maintain an upward trajectory in terms of expanding its capacity.

The esports industry has recently seen a considerable rise in cryptocurrency partnerships, the majority of which only include category exclusivity, branded segments and media placements. In an industry first, Galaxy Racer's pioneering investment in QUINT will see the token incorporated into the esports and lifestyle organisation's existing ecosystem by utilising its technology to support future initiatives and infrastructure development. The partnership will also see Galaxy Racer amplify and support QUINT in furthering its cryptocurrency ecosystem.

Galaxy Racer will integrate QUINT into its website's payment system and explore ways the token can be used across the organisation's esports tournaments, events and merchandising divisions. Looking ahead, the companies will work together to create an educational content series for Galaxy Racer's global fanbase and the wider esports community around cryptocurrency and web3.

Pseudonymous Shiba Inu (SHIB) founder Ryoshi has walked away from the community after deleting all of their Tweets and blog posts this week. Read More

Pseudonymous Shiba Inu (SHIB) founder Ryoshi has walked away from the community after deleting all of their Tweets and blog posts this week.

Similar to the Bitcoin (BTC) founder Satoshi Nakamoto, Ryoshi’s identity has remained unknown since the project launched in August 2020. Additionally, they have alsoheld a hands-off approachto the memecoin, much like Dogecoin (DOGE) founders Billy Markus and Jackson Palmer.

Lead developers such as Shytoshi Kusama have stated that the project will carry on and continue to “actualize Ryoshi’s vision and plan for this grand experiment” of building adecentralized memecoin ecosystem.

Ryoshi has hinted on several occasions that they would eventually walk away, as they often played down their significance and role in Shiba Inu. In a since-deleted Medium post, the founder reportedlysaid:

As it stands, Ryoshi’s Twitter account is still up but with all activity wiped clean, while two blog posts biddingfarewell to the ShibArmy are still up on Medium. However, some members have suggested that these posts may be from a scammer who created a new account under Ryoshi’s name.

The idea appears plausible, as previous reports linking to Ryoshi’s blog now bare the message “user deactivated or deleted their account,” despite another account being up using his same name and profile picture.

“I am not important, and one day I will be gone without notice. Take the SHIBA and journey upwards frens,” the first post reads, while the second one adds, “Every Shibarmy is Ryoshi. It does not represent someone, but the glory of Shibarmy! END.”

The Solana network is not having a good year, having suffered full or partial outages at least seven separate times over the past 12 months. Read More

The Solana network is not having a good year, having suffered full or partial outages at least seven separate times over the past 12 months.

A bug has knocked the Solana blockchain offline again as block production halted at 16:55 UTC on Wednesday. This latest outage lasted around four and a half hours as validator operators managed to restart the mainnet at around 21:00 UTC, according to the incident

Solana Labs co-founder Anatoly Yakovenko explained what happened in a

The network was restarted with this feature disabled, and Yakovenko added that fixes for the bug “will be out ASAP.”

Naturally, there was a fair amount of backlash from the community with comments like this filling up its feed:

SOL prices have taken a massive hit, tanking almost 14% over the past 12 hours or so in a fall below $40, according to CoinGecko. The network’s native token has now slumped 85% from its November 2021 all-time high of $260, and it is poised to slip out of the top 10 by market capitalization.

Solana, which has often been dubbed an “Ethereum killer,” has been fully or partially offline at least seven times since September 2021, when it suffered denial of service attack-related outages twice in the same month, according to the network uptime

The blockchain was plagued with problems in January when it suffered service disruptions and degraded performance for nine days out of the 31 in the month. Duplicate transactions were blamed for the second outage in January. In late April and early May, Solana was down again for almost eight hours due to nonfungible token minting bots overwhelming the network.

Additionally, Solana’s blockchain clock is slow and running 30 minutes behind real-world time. The status page notes, “On-chain time continues to run behind that of wall clocks, due to longer-than-normal block times.”

They are ready to start a full process tests for the FPS competitive mode.

With this, its expected the official version to come very soon! 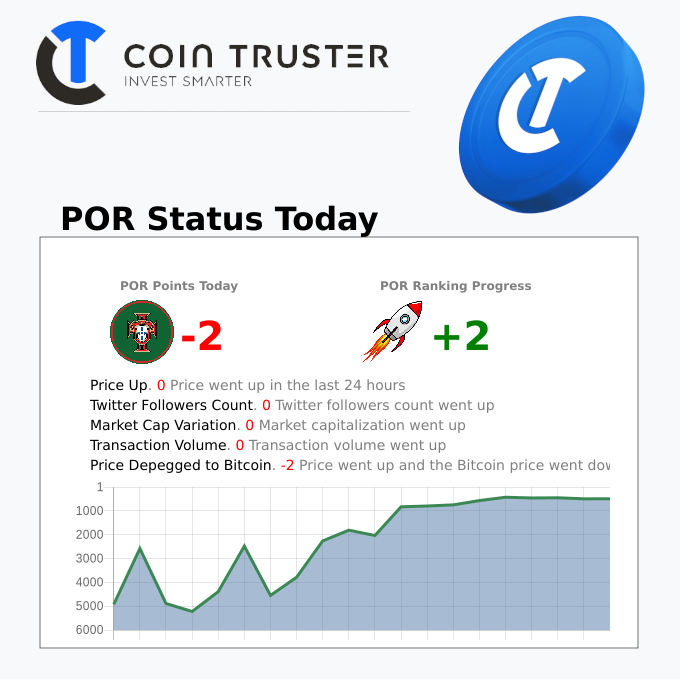 POR Status in the last 24 hours